Posted at 22:12h in Member Reports by Market Analysts Group 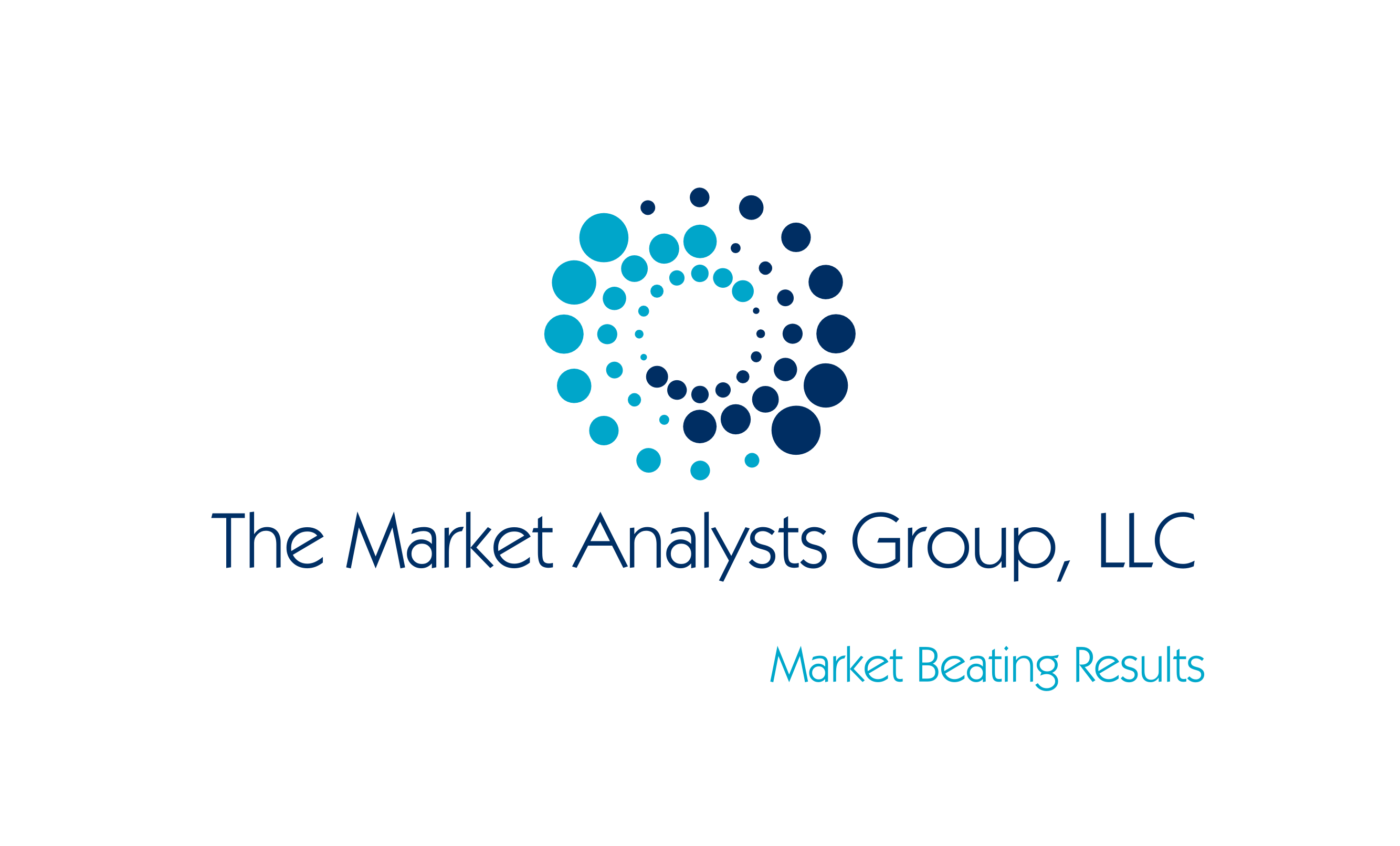 Publishers of Stockreversals.com (Opt in Free)

Obviously the indexes hit highs this past week, but today we point out some interesting intersections.

Much of our work on the forecast side is based on a combination of human behavioral patterns and or Elliot Wave Theory, along with other indicators we overlay to help keep us in check.  We do not just use Elliott Wave patterns in a vacuum because they can be hard to interpret correctly on their own.  However, sometimes other elements line up for a top or bottom and along with some fibonacci math we can try to draw conclusions.  In addition, we will throw in things like the 5 day Put to Call ratio, CNN Fear and Greed index readings, and other  indicators.

This past week we had discussed 2660 as a possible higher end pivot for the SP 500 if the 2633 area was taken out, which it was.  We have a few convergences right near 2660 that are interesting, along with a December 3rd turn window plus minus a day we have discussed at SRP as well.

We saw a huge downdraft on Friday after that level was hit all the way to 2605, and then a bounce.  The next level up is 2702  in the event of one more blast upwards, but the markets are obviously stretched here.  Markets tend to move in clearly defined patterns relative to prior movements. 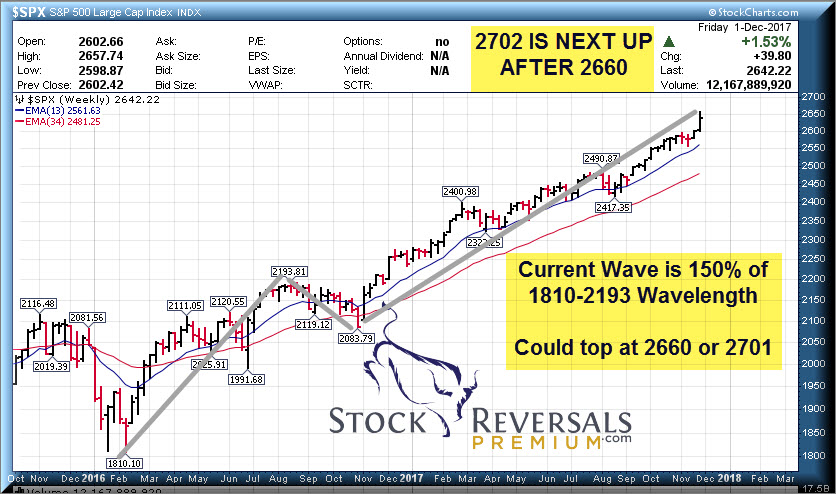 To be sure, there are sectors leading now and a rotation to some extend underway. The chip equipment stocks have been dropping hard off the highs, along with internet, chips, and Chinese growth names.  Institutions are front running perhaps some year end tax related selling in these winning sectors.  New leadership perhaps being displayed by Retail, Building, Finance and Banks, Broker-Dealers, Transportation and Energy. 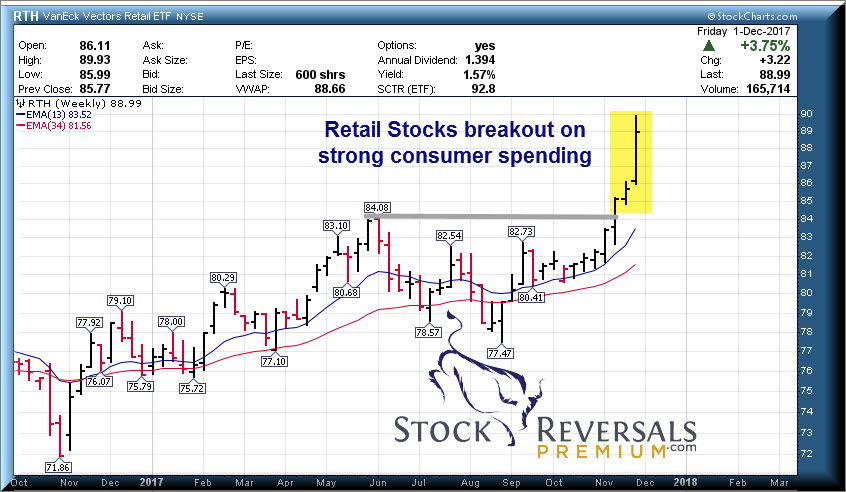 Small Caps Update: IWM has been strong after an 8 week base build 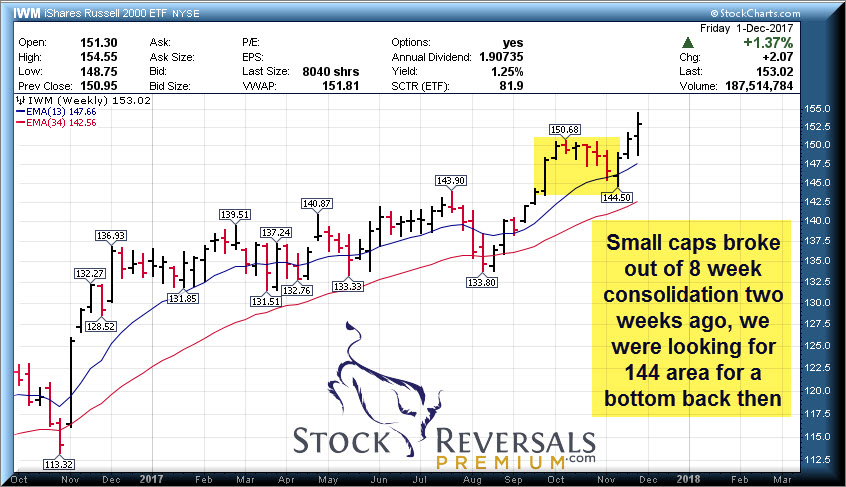 We are playing a bounce off a larger ABC Correction pattern in the Biotech sector, we saw some relative strength late in the week in the XBI ETF which pushed  up our LABU Swing Trade. 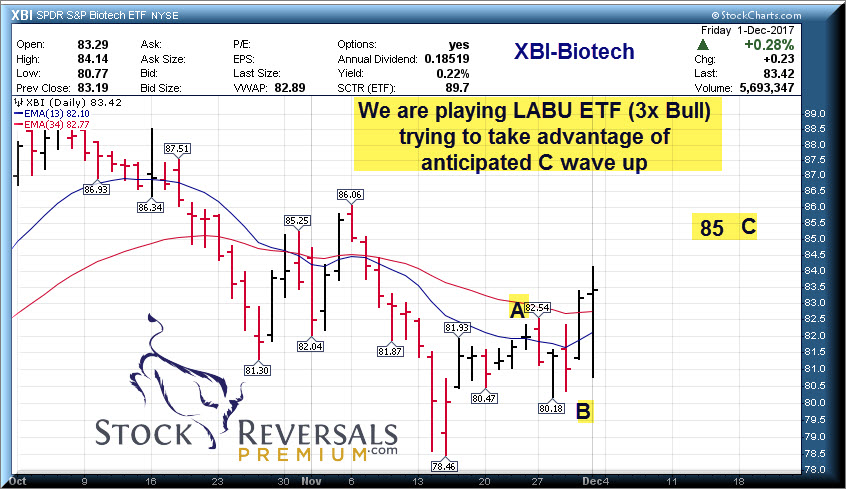 In summary the charts all look pretty bullish but lets be on our toes for these pivot highs being a possible problem for any further substantial gains ahead.  The Tax Reform bill has been responsible perhaps for much of this recent run up, but our understanding is the corporate tax rate would not be cut until 2019 calendar year, which to us means more uncertainty of if that ever happens.

Lots of damage in the tech stocks last week and some rotation changes up our list a bit this week, perhaps of a few of them will support and rally back as well.  This is a list of names or ideas we have and we usually drill down and possibly alert 1-3 of them during the week, and sometimes we lay back like this past week.

YY- Chinese name we recently played for huge swing gains, closed it out on the parabolic move up. That has paid off, now back down in possible support area near 100.

CTRL- Often on our list, pulling back to 31-32 support. They specialize in home  automation

SUPV- 7 week base for this  Argentinan Bank

PETS- 3 weeks tight pattern, with a base on base set up. Pet Meds delivered.

MLCO- 5 week base pattern, Gaming Resorts with exposure to Macau

This past week we closed out  SFIX for 16% and 40% gains on each 1/2 of the swing trade within 4 tradingdays.  We also closed out FNKO for 7-14% gains, and issued new swing alert on LABU ETF which rallied up late in the week.