Posted at 22:30h in Member Reports by Market Analysts Group 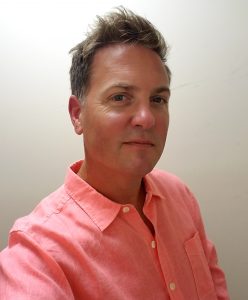 Two weeks ago in our Monday morning SRP forecast section, we projected a B wave rally to the 2462 area. These rallies normally take the form of an A up, B down, and C up.  This past week we finally hit the nadir or pivot area of a B wave projection, and then popped even higher.  Much of that likely came from extremely Bearish sentiment readings coming into this past week as we pointed out last Sunday.  Also, the Gilead buyout of Kite Pharmaceuticals (KITE) sparked the Biotech sector in a big way as well.

We actually saw the SP 500 rally up to 2480 on Friday which was 5 points higher than our max projection of 2475. This now calls into question or projection that we are in Major Wave 4 from a Major 3 high of 2491.  The A wave to 2417 was a perfect ABC pattern, the B wave up so far is pretty normal but maybe a little higher than typical.  What is missing still is a C wave to test the lows of 2417 or down to that 2395 area.

At the end of the day, its a forecast and sometimes the model is offline a bit, so lets see how the market plays out now ahead as Traders come back from the Hamptons.  At our SRP swing trade service we have made some strong bank this past week alone on this B wave as we pushed money into Chinese names near the bottoms of their pullbacks, including YY, MOMO, and BGNE.  When you know a B wave rally is due and sentiment is at extremes, you push money in with confidence, more on that in lower sections.

Lets examine the Daily and Weekly SP 500 conditions via the charts: 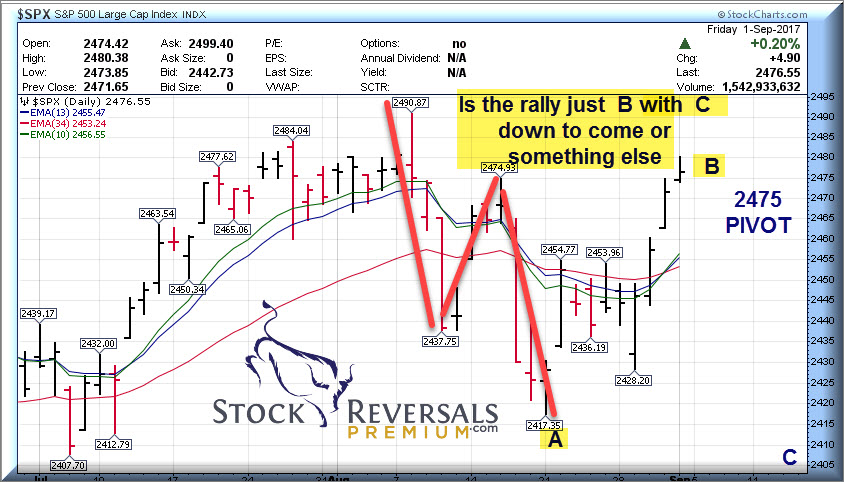 The Weekly chart shows Major 3 topping at 2491, all of this lines up nicely.  Lets see if the SP 500 can break out and surpass that level or if we drop down in a C wave to complete an ABC pattern 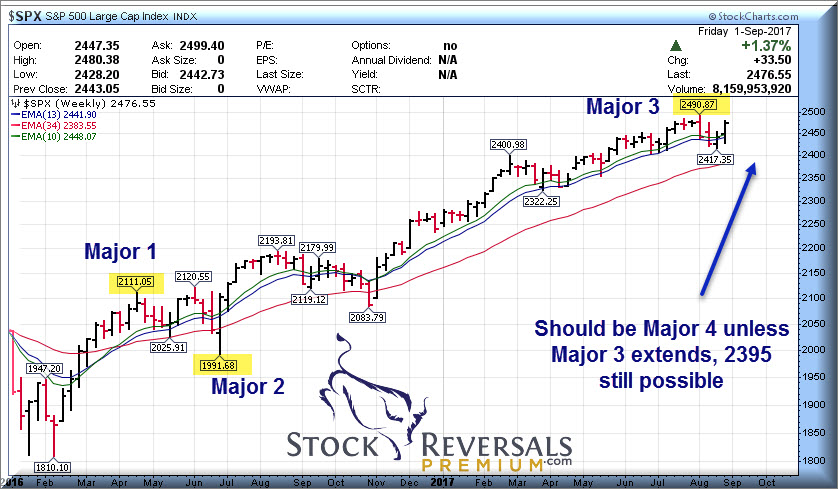 Small Cap Update:  The IWM ETF had a 5 wave decline, and usually that puts in an interim bottom sentiment wise and causes a reactionary rally. This is something we pointed out a few weeks ago in this chart, and it played out with a large move. Right now the IWM is at a key pivot of resistance, much like the SP 500 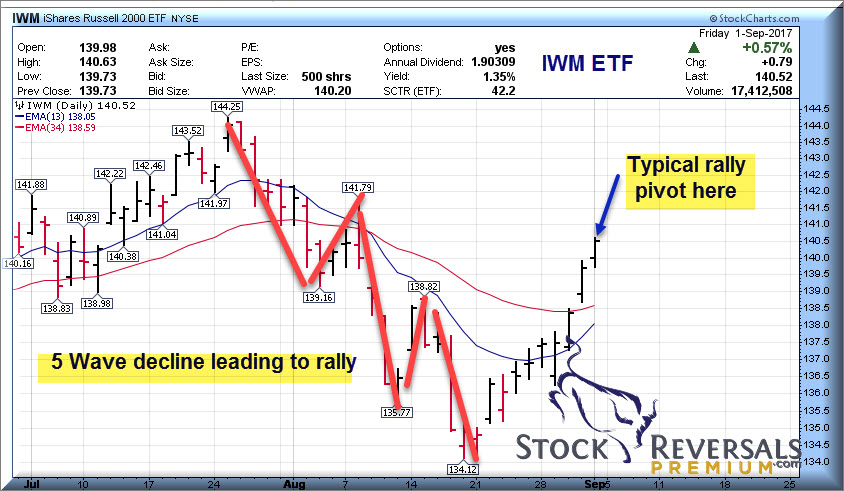 Bottom Line: So far reactionary rallies off major sentiment pattern lows in the indexes, the NASDAQ nearing all time highs and leading, Biotechs breaking out.  We had some strong gains at SRP with our swings as we were buying towards the tail end of the correction, now indexes must push through short term resistance pivots to sustain the rally, otherwise a C wave correction is on deck

CNN Fear Gauge put in bottom a week ago as we pointed out last Sunday, here is the bounce chart: 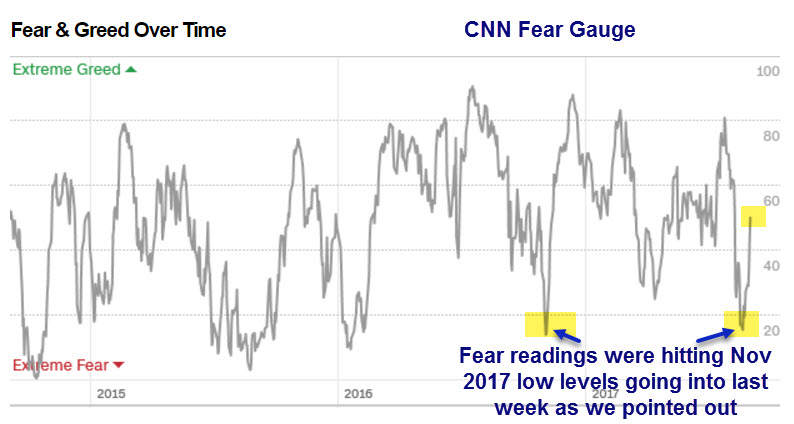 Biotech stocks get re-valued after KITE news as GILD moves to acquire at a premium valuation.  (JUNO, CLLS, BLUE all moving amongst others. SRP was among first to cover this sector a few years ago (Immunotherapy)

Celgene breaks out after being on our Sunday list again last week, a 10 point move up. Celgene has been on our lsit of must own blue chips since November of 2016, its like owning a Venture Capital fund along with a profitable Biotech with top management.

Bulls at 49% in Advisor Surveys. NYSE short interest at one year plus highs, causing some of rally

At SRP we focus on a combination of fundamentals and technicals to come up with reasonable downside risk and strong upside Swing Trades for our members.  We never focus on just fundamentals or just technicals on any trade, both must line up.  This reduces mistakes and produces a lot more winners and winning percentages.

One of the classic patterns we like is the ABC correction or the 5 wave correction pattern.  This week we focus on MOMO which is a Chinese broadcaster and content provider, social media site.  The stock dropped in 5 waves from 46 to below 33 after earnings, but it did this in a clear 5 wave pattern.  As we saw the 5th wave finishing up, we alerted this past Tuesday to buy around $34, while most traders were bears or taking losses on the stock.

The 5 wave decline is a classic Elliott Wave pattern that nearly always will lead to a counter-trend rally, some type of ABC upwards to correct the extremes in negative sentiment. MOMO is just one example because we also entered BGNE on Tuesday, a Chinese Biotech that was going though an ABC correction of its own. It soared almost 7 points on Friday alone.

Below is the MOMO chart, this led to a nice 12-15% upside move in 3 days for SRP members this past week. We already liked the fundamentals, but the chart pattern told us to pounce.  Our target at 34 was 41.25, we hit  a high of 38.87 so far. We took 1/2 off the table during the week as we always do to bank profits and then ride the rest. 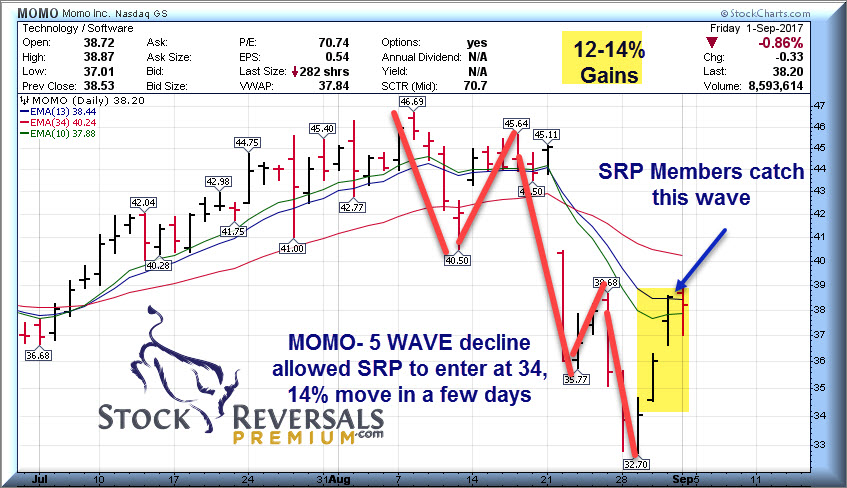 Every weekend we try to lay out 8-15 names of stocks that look good for upside. Last week we had about 15 names and a large majority of them had strong upside weeks. We often drill down on this list during the week to select a few to alert to our SRP members.  The list is great for study and ideas for our members.

HOME- Retailer of furnishings and more for the Home

ATH- Athene Holdings is a distributor of financial products, like Annuities, reasonable PE

LRCX- 13 week base, semi equipment maker, PE 17, these stocks may be coming back soon

CTRL- Always on the weekly list of late, 8 week base, bounced of 10 week line, Automated home

EA- 6 week base, broke out and pulled back this past week. Video software and content leader

PLNT- 4th time on list of late, 4 week base near highs. Planet Fitness a glorified REIT

MKSI- 18 week base, maker of tech components, generators and more

STM- Chip maker due for breakout. Chips for intelligent devices