Posted at 00:47h in Member Reports by Market Analysts Group

A head shaker of an ending to the trading week last week, or was it?  We have been writing about  and projecting a coming top of Major Wave 3 in the SP 500 with a 2443 low end target we put out in late March.  We have never moved even one point off that target the entire time during this 5th wave of Major Wave 3.  The reason is that is a low-end target, it’s the absolute minimum we expected to see for a Major 3 high.

This past week we hit 2446, just 3 points past our 2443 target and that was on Friday.  What happened was a massive reversal which makes sense.  You get a human behavioral reaction off those pivot points and they are often violent and come without much warning.  We saw the SP 500 hit 2415 but then bounce up to close in the 2431 area.

We also saw the Tech Stocks (QQQ ETF) really get hammered, reversing so hard intra-day that they filled in a 38% Fibonacci pivot right near the days lows before a slight bounce, and that was violent action with volume.

Now everybody wants to know… was that the top?  The answer is yes and no…

Why?  Yes, 2446 qualifies for a Behavioral pivot high and possible top for Major Wave 3. However since it’s the very low end of our projections we have not yet confirmed that was the official top and 2476 is actually a  perfect pivot high. Its also possible we end up with an extended 5th wave up from 2323 4th wave lows, so right now we do not have a definite answer.

What we can do is review the charts both daily and weekly and see the pullback though sharp, is still within the uptrends.  As much as we love our Elliott Wave theory work, we like to keep ourselves in check with other indicators as well. 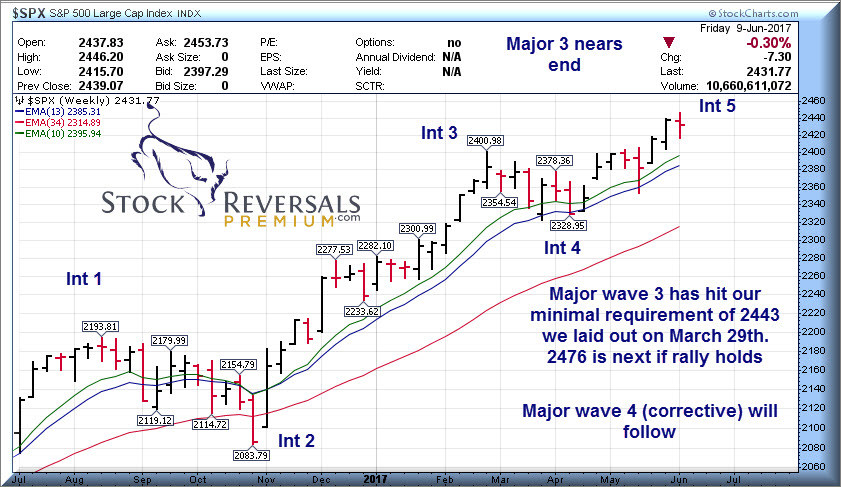 Daily SP 500 chart shows a sharp pullback on Friday below.  A large intra-day swing and yet still above the 13 day EMA which is at 2422. The 13 day EMA is a line we often use at SRP for our forecasts, as well as 34 day EMA. 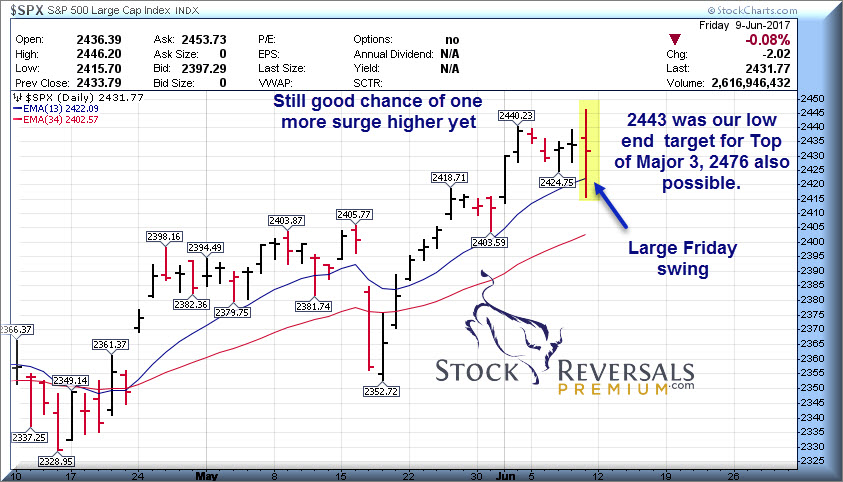 So we do not have a confirmed Wave 3 top just yet but we will be keeping our SRP Members up to speed during the week based on developments.

The Small Caps (IWM ETF) we have been discussing for two weeks as possibly out-performers relative to the Large Caps going forward after a more than 6 month consolidation.  This is something to watch closely and we can see with the IWM ETF chart below the relative move of late:

We can see a short term double top in the IWM but what we may get is a pullback and then surge higher, depending on the status of Major 3 near term. Its a pretty deep cup base pattern..

A sharp drop on Friday after the NASDAQ hit highs as well as the SP 500 Index.  This looks a bit forced and algo based as stops were run with power. Note the huge volume bar at the bottom of the chart.  That said, even with the short term damage the general uptrend lines are not yet broken.  We could see the QQQ in the 132 area at some point ahead as Part of a Major wave 4 so bear that in mind as well. 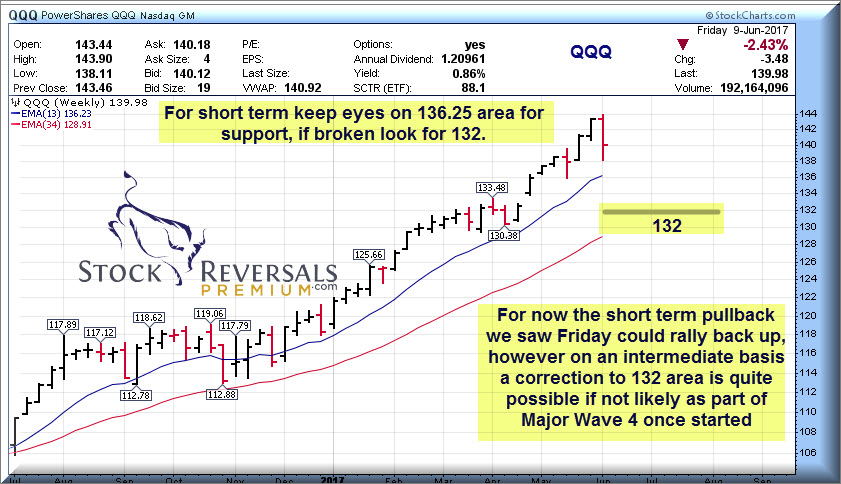 We had updated our SRP Members and SR members both on Friday to look for a surge up in the XBI to test Spring highs, and we said look for a pullback right after that surge which may set up an LABU ETF entry. This is exactly what transpired, below we show our Friday morning chart and then the end of day chart.

Friday pre -market prediction of pattern, it played out that day… 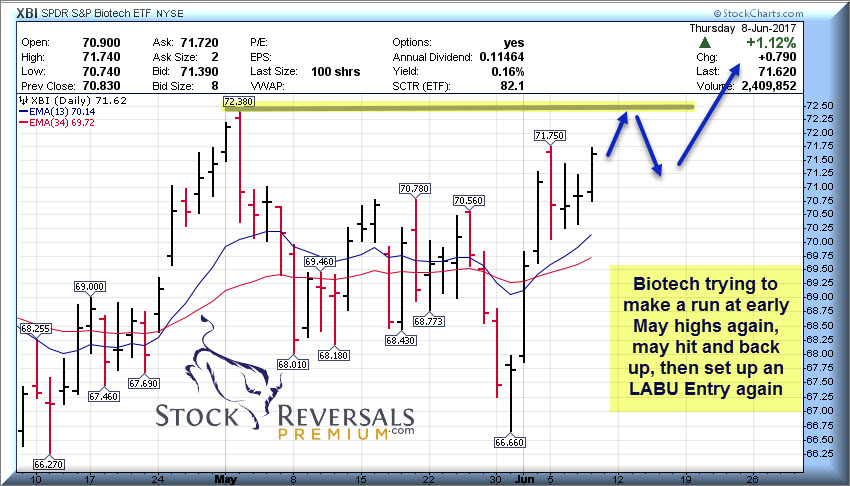 Below you can see the intra-day spike high at 72.75 for XBI then the sharp pullback to 70.71 before the bounce 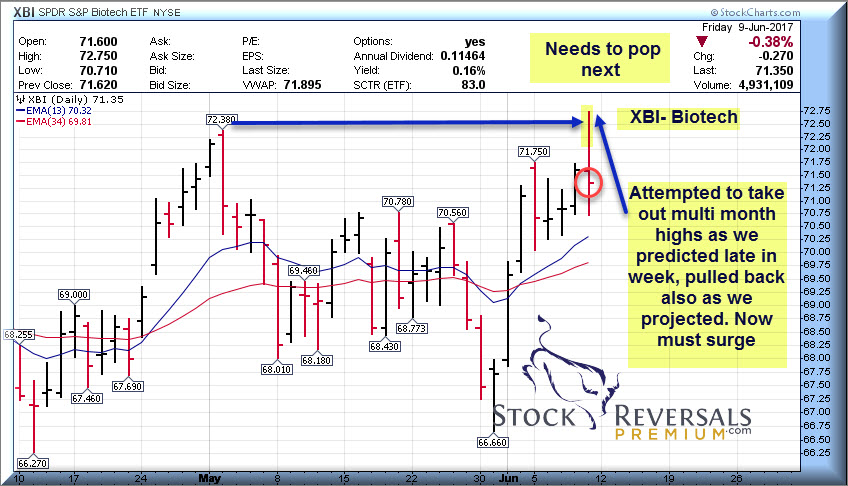 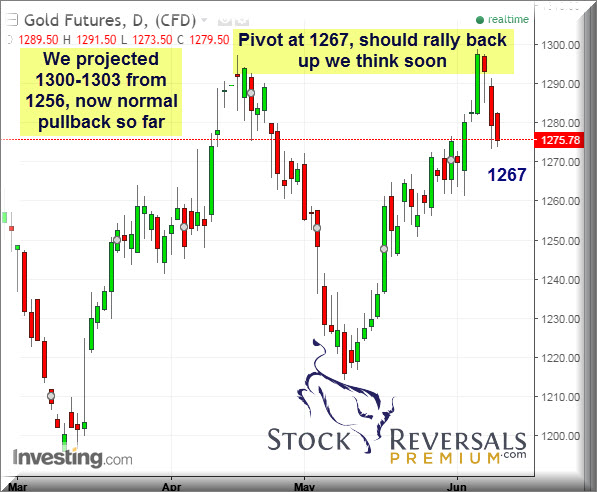 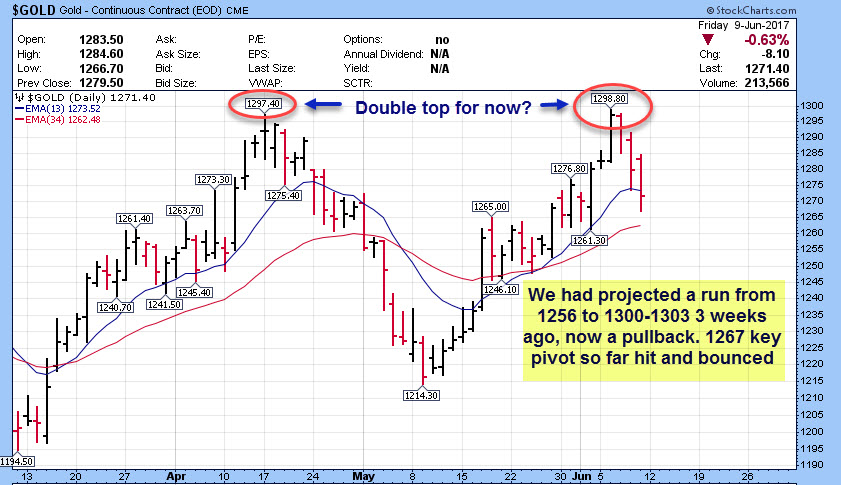 Bottom Line?  No clear confirmed top yet, we hit 2446 which is close enough to our projected 2443 minimal high for Major 3.  Gold hit a double top which we projected and pulled back to the 1267 pivot.  The QQQ index actually hit a 38% Fibonacci pivot on Friday and bounced a bit.  The XBI ETF hit a high and pulled back as we thought.  Let’s see how the action unfold this week with the Fed meeting and also a big E  Gaming conference starting Tuesday.

Money seemed to be rotating into Banks late in the week after a very long consolidation and corrective period.

Look for stocks with relative strength during any pullback for candidates

Each week we put out a list of 10-18 stocks that we like and plan to do more drilling down on.  Last week quite a few of the names were doing very well up until the Friday afternoon slam.  BABA was on our list of 11 last week and was the clear winner.

GDOT-  In the Cashless Society sector as we say, hitting highs. Been on list multiple times

GRUB- Now on a 7 week base for this Food Delivery play, on list often of late

MTSI- If $53 area holds on pullback its attractive

SQ-  Cash  less society, on the list many weeks ago before huge move up.  Pullback more attractive.

Z- Zillow had surged after being on our list many weeks ago, now a pullback could make more attractive

WD- 7 week base pattern, also in financial sector.  Surged off a Sunday list many weeks back, provide financing for multi-family and other properties. Reasonable PE ratio too

MGM- 7 week base for gambling concern

SRP Swing Trade and Forecast Alert Service: Read up and join today –  See what our customers are saying, our full track record, sample alerts and reports and more.