Posted at 18:01h in Member Reports by Market Analysts Group 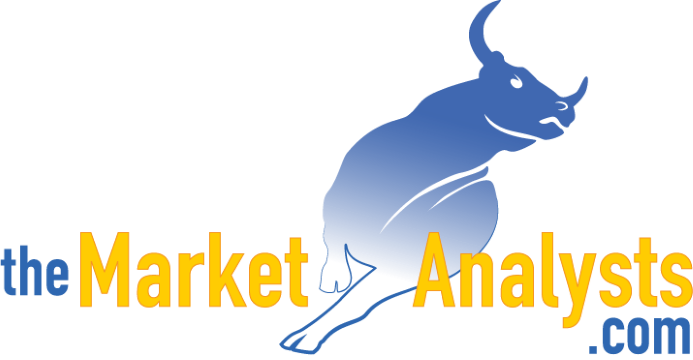 Read up on all 5 Subscription Options at TheMarketAnalysts.Com or bottom of this Report

Read up at TheMarketAnalysts.com for all services and Track Records

Most of my members belong to between two to four of my advisory services for best results as some zig while others zag.  Bull or Bear environments can pivot quickly.  In the SRP flagship stock swing service we hit CHWY for big gains as well as DEAC after sitting on bases for a bit. We hit LABU for 12-14% gains in the 3x ETF service and made 8% on 1/2 of TZA and lost on the final 1/2 after the Fed Thursday 2.3 Trillion bazooka.  We made 44 points in profits early in the week in the Stocktwits Futures (SP 500) service, lost 5 points later in the week for net of 39. (Each point is $50 in profit per contract).

3x ETF Service on Stocktwits.com :  $40 a month,  Track Record   is online. Pull more money from the market bull or bear with my Behavioral based and contrarian approach to 3x ETF trading!  We solely trade 3x ETF Bull and Bear pairs as the market dictates. Read up at The3xetftrader.com   Use the Subscribe tab to join off your desktop on Stocktwits

Stocktwits SP 500 Futures Service:  $50 a month,  Join the Trading Room and Follow my SP 500 guidance, Charts, and trade yourself with my alerts and guidance  See details here:  Stocktwits.com 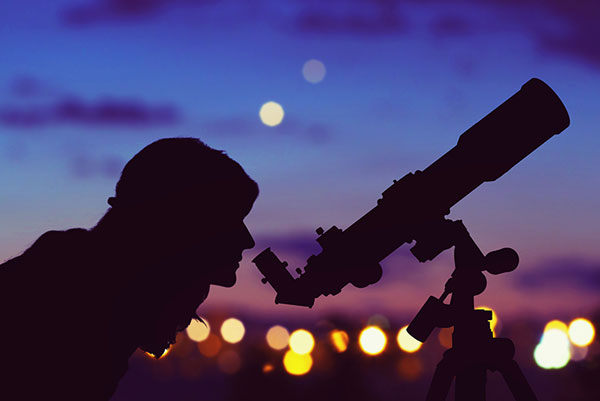 On Stockwits (Username @stockreversals)  in the $ES_F E MINI Futures thread: (Everyone was BEARISH that morning) Note the date and time on the notes… this was a pure Elliott Wave read, a 5th wave had met all conditions at 2172 ES overnight.  More evidence markets can be projected based on Behavioral Patterns, lots of math, and a few other indicators to keep me in check…

Forward a week later after a nice rally

I suggested a rally to 2784 in an ABC fashion off the lows was likely on March 29th, Sunday.  We hit 2784 on the nose this past Thursday, pulled back, popped to around 2809 in a spillover top then closed the market day around 2790 on SPX and 2784 on futures.  So we have an ABC rally, typical Bear cycle rally of a 50% retracement… Chart from March 29th report below for reference: 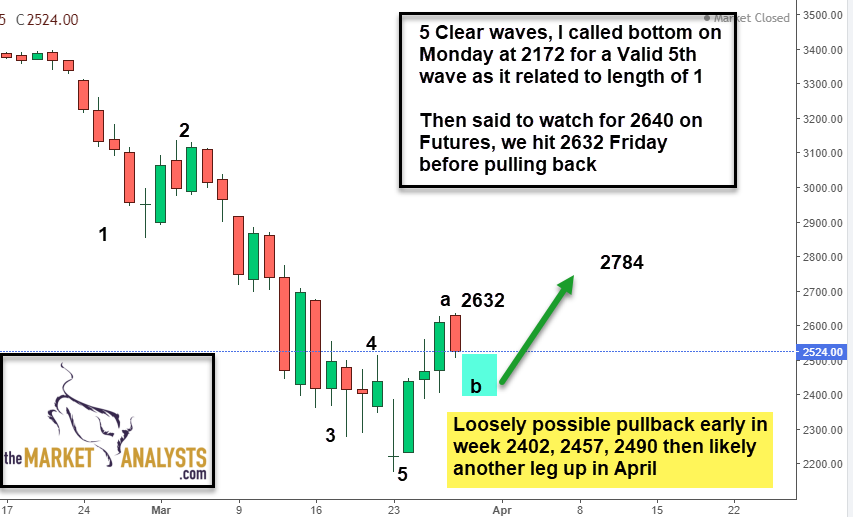 Last Sunday we were at inflection, and we went north not south… chart repeated for reference (We hit 2790’s Thursday)

Well that is what everyone wants to know.  Various Advisor’s whom I consider intelligent and savvy differ on opinions here, the market once again at an inflection point like last week when we were stuck on the 38% retracement ceiling. Frankly there are not many out there putting out a firm projection right now, and I do not blame them.

I try not to get too far ahead of myself with my interpretation of Elliott Wave patterns, preferring to stay in the current most likely wave moment rather than try to jump more than maybe 1 wave movement ahead.

I look for clues to tell me we are in a new wave, right now that’s around 2720 on the ES Futures contract from last Thursdays highs give take a few points.

With that said, if someone pinned me to come up with a near term forecast, I would lean to a further upside rally to various levels.  Best ones (SPX) would be 2893 and or 2933 areas ahead.  Both of those areas should provide strong resistance to the Bull rally for now, and a normal pullback from there would make normal sense both behaviorally and market wise off the 2190 (SPX) lows.

The real question is … Is the Bear Market Over?  Back on March 23rd, the day of the bottom I publicly declared the bottom was in pre market on various social media outlets. We had met a 5 wave Futures decline at 2172 from 3397 at at that point in my view, and a rally to 2784 seemed likely if we got past 2640 area target.

Now it’s much tougher to call because we have major economic dislocations on the street, but the Fed fighting that will trillions of infusions.  Gold is ripping to multi year highs in a Bull market with the paper infusion.

Given the severity and speed of the decline, there is a chance that a price low of 2190 SPX was put in for this Bear cycle, with a pullback obviously due.  Near term, I’m focused on making profits on swings whether up or  down and my advice to members will be based on market action and my view of the wave patterns.  If we rally towards 2893 to 2933 area look for resistance there, after that it’s 3043 and 3135.

Bottom Line? If someone pressed me I would lean to a bit more upside near term and would probably not get crazy shorting unless I saw a material break of 2720 on the ES Futures contract. 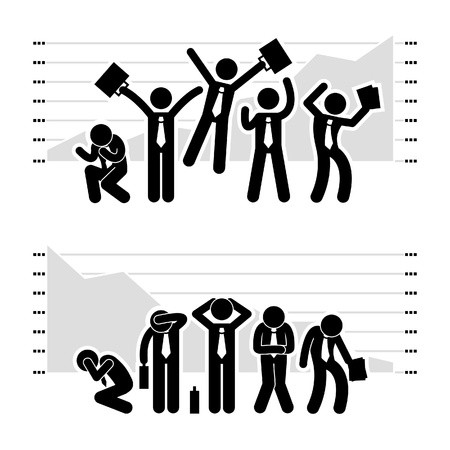 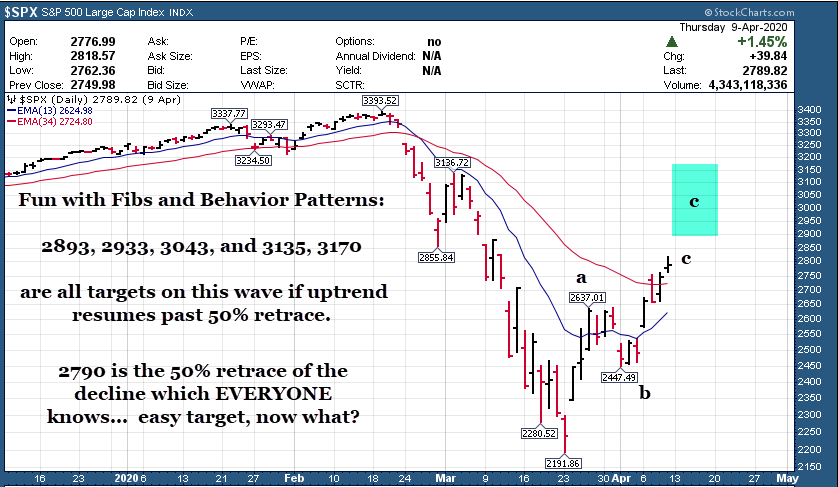 Smart Money Bulls are long the market, Dumb Money largely on sidelines, like prior market bottoms 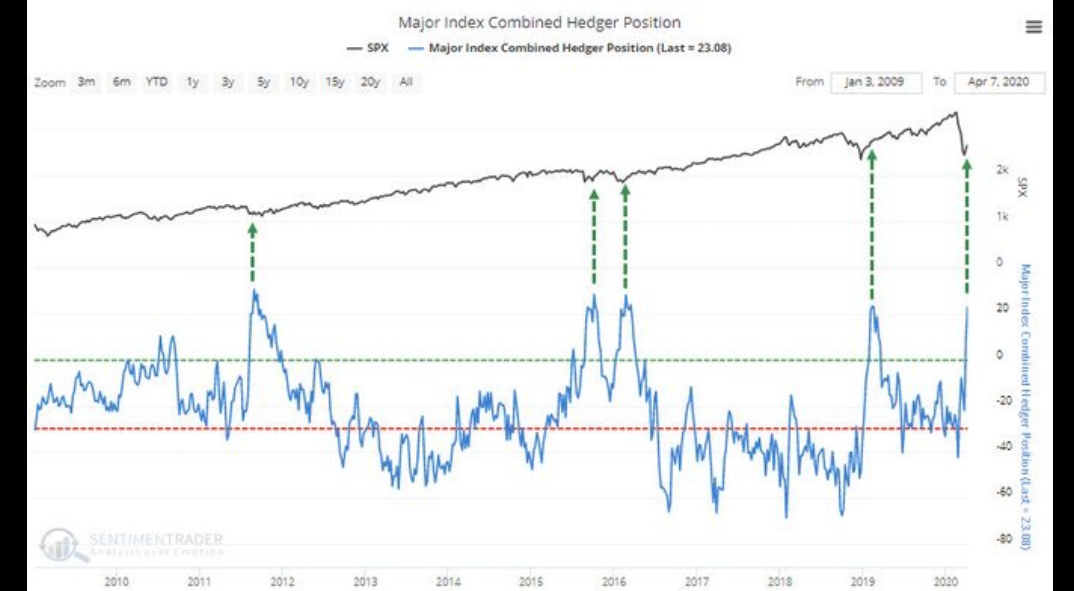 The March 2020 low readings on this NASI indicator similar to Dec 2018 Bear lows, except this NASI crashed in 5 weeks not multiple months, creating extreme conditions for a bounce up… 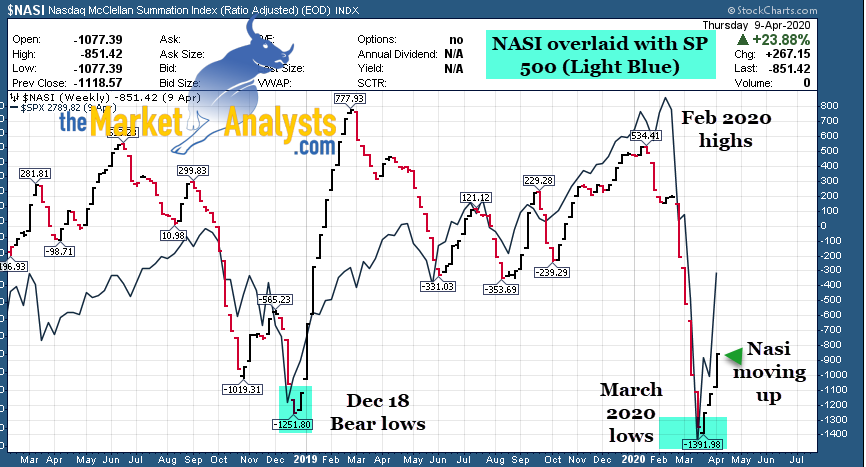 I called a low at 1450 a few Sunday reports ago.  We are in Wave 5 up to all time highs I think or close. 1780’s initial resistance likely.  Nice Fibonacci Patterns here 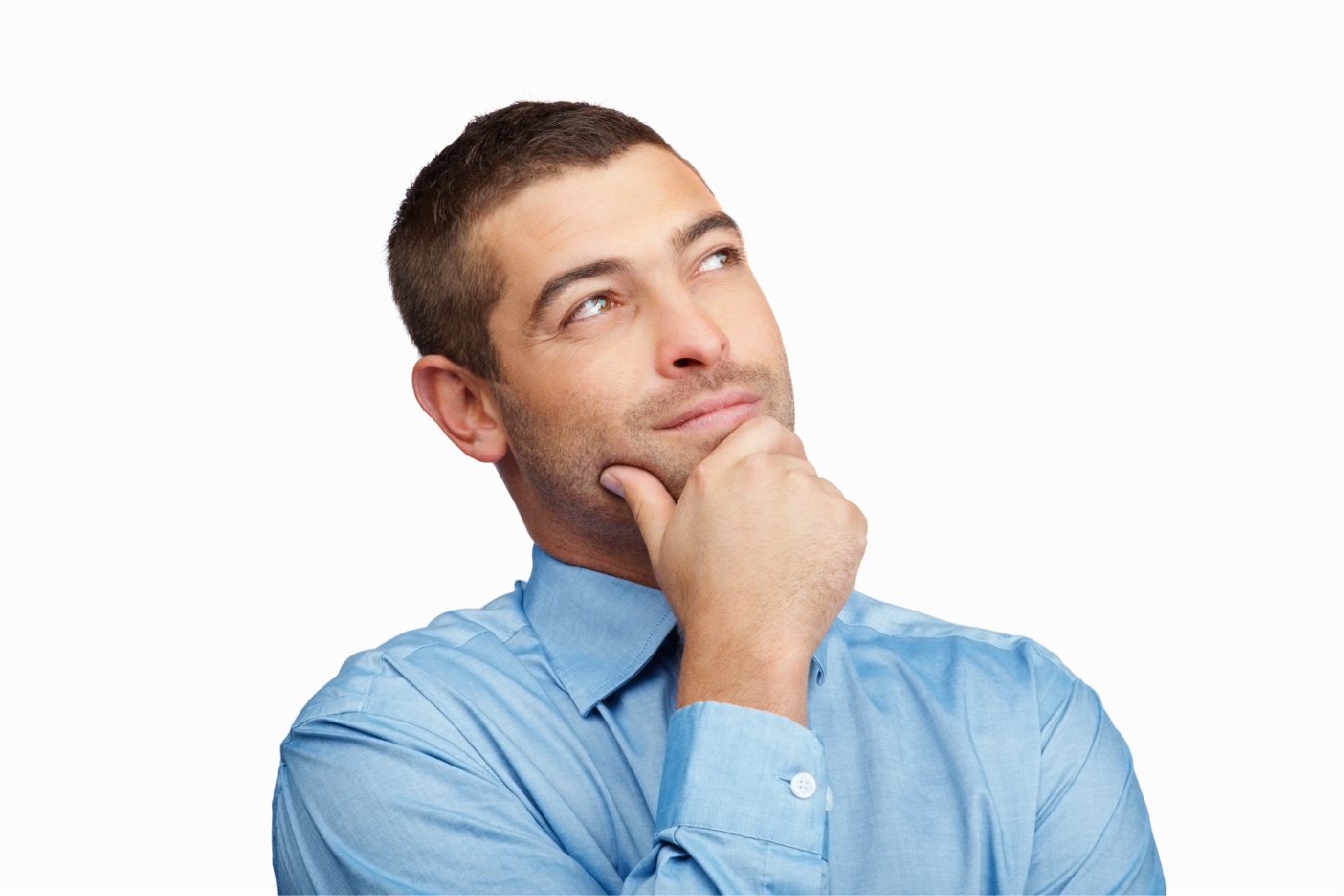 Other Notes: Venus Retrograde and prior crash lows, The Oil Indicator, and Bulls and Bears Ratio

Of interest, several major Bear Market lows have occurred when Venus goes into Retrograde.  The last ones being during the Depression in 1932, October  of 2002 (Market low with a re-test higher low in March 2003), and March 6th 2009 (3 days prior to the ultimate low).  The next date for Venus Retrograde is May 13th, something to watch.

Oil bottomed in the last major crash about a month before the market bottom in March 2009, we are seeing a similar possible pattern now in the SP 500 with Oil rallying last week but with SP 500 possibly needing one more leg down yet.

The Percentage of Investment Advisors who are bullish has tanked to just 33%, up 2 points from 31% last Sunday.  Bears are still at 36%, down from 41% recently.  Still contrarily Bullish near term.

Consider joining my subscription services at TheMarketAnalysts.Com for tradeable ideas and updates daily, and if not you can follow my comments during the week:

Corona Economy- thinking outside the box

Swing Trading Ideas: I’m calling it the Corona Economy in terms of thinking of Stock ideas short to  intermediate term. What MAY work in the new environment? 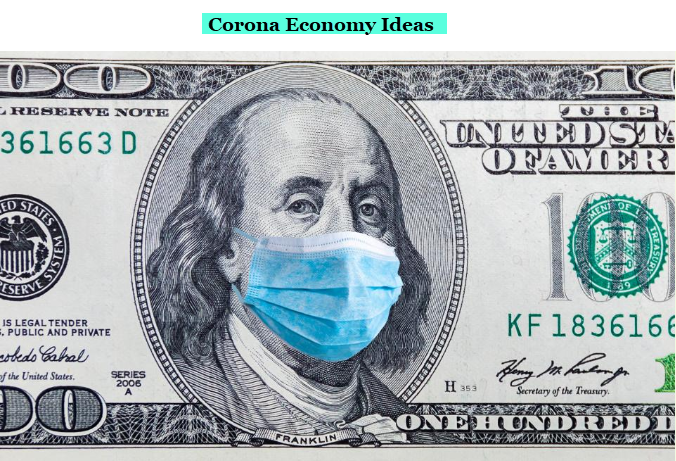 Last week once again numerous winners off of this list during the week.

This week and for the near term period another list of Corona Ideas and more.

Consider Catasys as just one example of a Telehealth play, CATS.  There is a long term play from my Tipping Point Stocks service. Ripping from $8.90 to $22 in last several weeks.  Chewy last week ripped higher after we bought in the prior week at the Swing Trade service, online pet supplies. DEAC ripped higher as well, the Draft Kings SPAC shell we bought a few weeks prior, knowing that it would close on April 9th and would run up even though there are no sports right now… the market looks ahead 9 months!

So here is a list of symbols and quick notes for this week and the period ahead to keep an eye on.

DOCU- Corona Idea of the week… Online documents, looks like a breakout coming after recent pullback and pop. Was on the list a few weeks back before the surge from 82 to 98, now back near 90

NFLX-  On the list several weeks ago from 290, ripped higher and a nice 3 week base. Online streaming

CRUS-  Apple supplier on a recovery?

DPZ-  Dominoes pizza, 8 week overall base. On the list weeks back… food delivery, teens love it…

EHTH-  E Health insurance based play, got hit on a Muddy Waters hit piece, but recovers?

FVRR-  Remote freelance gig economy, I brought this up weeks ago on the list.

Read up at TheMarketAnalysts.com for more details  Track Records available for all services!

The3xETFtrader.com–  Swing trading Bull or Bear 3x ETF securities only. Hosted on Stocktwits.com for just $40 per month.  A great way to trade bull and bear reversals using my behavioral pattern analysis with a twist! Launched in late September 2019 and already establishing a strong track record of profitable trades!

Tippingpointstocks.com– Growth Stocks with 50-200% upside with our proprietary research! We cashed out on SOLO for over 200% gains in 5 weeks!

Great morning SP 500 Futures trading guidance and alerts! We keep you on the right side of the market direction and trades.  Tax Favorable treatment, simple reporting to IRS, eligible for IRA and Regular Accounts both!

This service focuses on the SP 500 using  my Wave based market behavioral models and then translates that to Futures Trading advice and alerts. Short term and long term views…morning updates, trades and more. 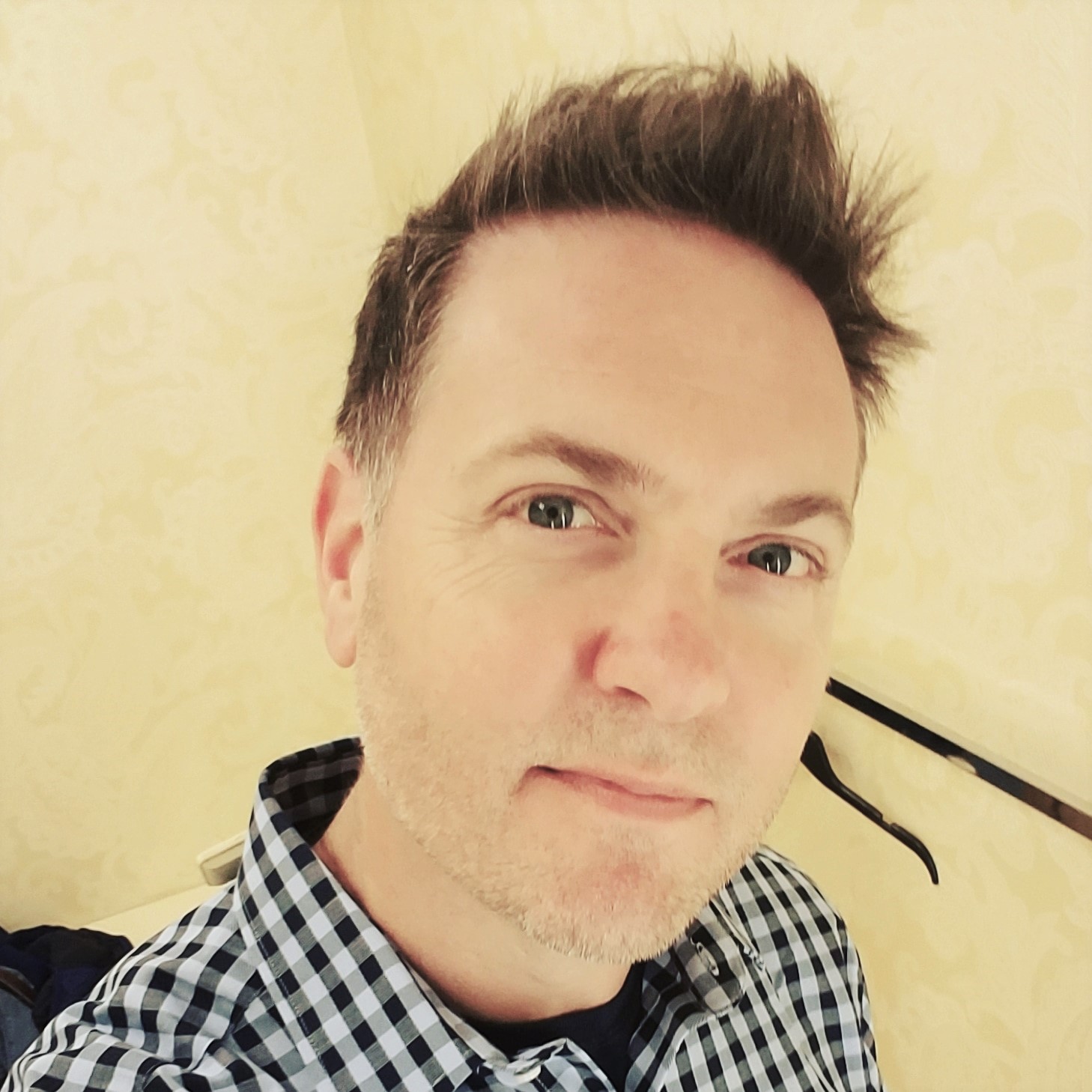