Posted at 21:23h in Sample Reports by Market Analysts Group

MEEC .50 cents at time of report 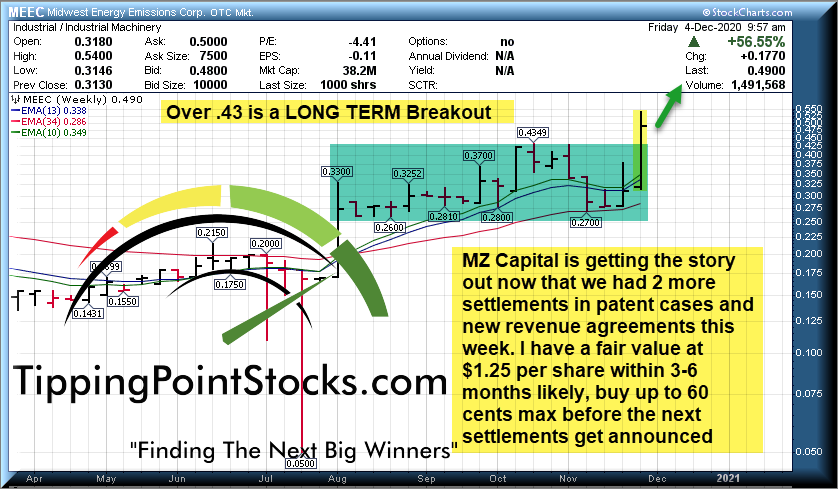 A Clean Energy play with massive upside, my targets are conservative

Buy up to 60 cents adding to 42 cents on any future dips if they happen.

Possible double in 1st quarter 2021 based on expected court settlements and new revenue agrements and MZ Capital group now in charge of I.R.

This I.R. firm MZ Capital often gives me ideas when they are getting ready to take on a client to get their story out.  I got the call this week on MEEC and after a conversation with the CEO of MZ Capital Greg Falesnik,  and the CEO of MEEC on Friday at 1pm EST Today (will pass along notes later), along with further due diligence, this is at a Tipping Point for Investors. The first of many Patent settlement and long term revenue contract agreements should now begin to roll in with a Domino effect- Dave

MZ Capital Group which started working with EXPI at $2 (been to 50, former TPS Play), GRBX at 12 cents which they told me about this past August, (Just hit $1.00 5 months later for an 8 bagger), SOLO at $1 which hit $13 20 months later (13 bagger and TPS made about 300% on it last year) just naming a few.. has recently signed on MEEC as a client to get the story out, and MEEC is at a Tipping Point in the growth story. 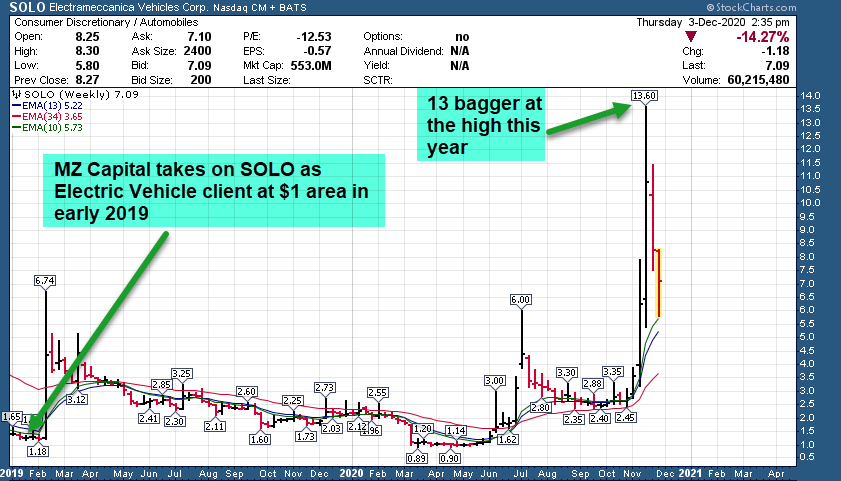 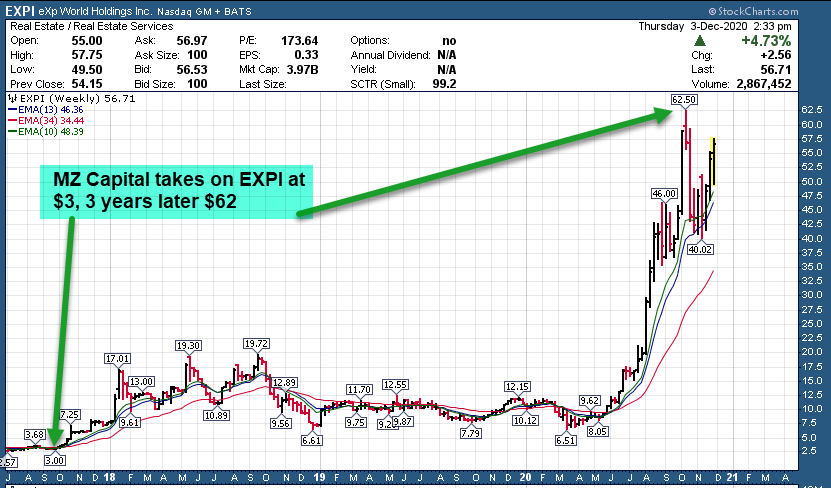 MZ Capital actually worked with MEEC in 2014-2017 during their aggressive revenue ramp (reaching a peak of $32M); MEEC then encountered fairly widespread industry adoption of their patented technology (the equipment, specific formulations and the process). MEEC felt all of these Utilities were infringing on their patents, essentially bullying the smaller company. With no way to enforce their patented position, MEEC conducted significant IP work over the last few years and retained Caldwell Cassidy & Curry (recently won major 500 million dollar IP suits against Apple and Microsoft) to help them recognize the value of their patents on a success basis.

The forward PE Ratio at 4x 2021 and less than 2x 2022 earnings estimates per Management based on assumed patent settlements and 5 year plus contracts being signed by Utilities that are all already using their technology illegally.

Having recently settled with the first two major utilities in the market for their IP, they are moving quickly to aggressively defend their IP with hundreds of other infringing parties, a several hundred million dollar opportunity. Ultimately, this will result in the Company receiving license fees for the use of their technology or additional long-term supply contracts. That said, the company anticipates a significant revenue ramp over the next few years with leverage to increase margin as they grow

Cases being settled with two of the top Utilities in last few months should open floodgates to multiple agreements:

The company does mercury control for coal-fired power plants throughout North America. Alternative mercury control solutions require a high amount of material that make controlling mercury quite expensive and inefficient. Initially developed by ME2C’s own Chief Technology Officer at the EERC (preeminent coal research institute out of North Dakota) and vetted by the DOE’s NETL in early 2000s, the Company quickly recognized the potential, commercialized the technology and acquired the patents outright. Today, the company not only supplies a piece of equipment that is attached to the boiler, provides a patented, two-part approach to mercury capture.  The sorbent application at both the front and back end of the boiler is highly efficient, uses less materials, and retains the quality of the coal’s fly-ash, a profitable by-product of mercury emissions capture that many other technologies degrade.  Leveraging decades of industry expertise to analyze the specific type of coal, ME2C’s sorbent blends are tunable to address specific coal types and plant environments. ME2C operates as a business partner with their customers with whom they have gained long-term supply contracts.  ME2C’s holistic approach to mercury capture is far different than raw material suppliers. ME2C secures long term supply agreements with a recurring aspect of annual business. ME2C’s technologies are ESG-focused as they require less material to efficiently reduce a higher amount of mercury from being emitted than other technologies.

Plants see significant cost savings from improved plant operations, which ME2C actively supports, and less deterioration of plant equipment. The coal’s fly-ash is sold as a commodity and used in current research for the development of rare earth elements (REEs), which are widely used in technology, defense, construction, and many other industries.

ME2C is confident that up to 200 Boiler units are using our patented, SEA® technologies. Since we had 3 major Utilities all settle and set up revenue agreements in the past 20 days, I expect the rest of them to follow in line like Dominoes.

• These infringing units would be seriously challenged to remain within federal and state mercury emissions
regulations without the use of our patented SEA® process.
• There is no other technology available today that is more effective than the SEA® process in terms
of emissions capture, cost savings, or achieving overall plant improvements
• States must adhere to 2“best system emissions reduction” by Spring 2022

Target is $1.20 possibly in 1st quarter 2021 based on expected settlements coming in fast with Utilities and 2.25 possible in 12-18 months