Posted at 12:52h in Member Reports by Market Analysts Group

Editors Note: This report on SOLY was originally published on March 11th at $5.85 and sent to Tipping Point Stocks Members with a $16 12 month target. As of this update, the stock is at $9.40 on April 2nd up 60% for Members.

2.2 Million shares sold at $5 in February 2019, Reg A+ IPO Offering which allows smaller companies to avoid many of the expenses and paperwork of larger company filings. (Similar to SOLO and others that have done well)

Recent IPO of an exciting new medical technology company affiliated with the MD Anderson Cancer Center. SOLY went public in February at $5 and is just now breaking out on some volume from the POST IPO base pattern.

In a recent clinical trial, 100% of patients were able to completely remove their tattoos within just two or three office visits using the Company’s RAP device, in conjunction with a Q-switched laser,  versus the industry average of 10 or more with a stand-alone laser with much lower costs and much less pain.

38 patents issued and or pending in China and more pending in the US, both large markets. They are finding more uses for the device which would dramatically expand their market opportunities.

With an 85 million market cap and FDA marketing submission around the corner for Tattoos, there is significant potential upside here in the shares post IPO. Reminds us of ZELTIQ which we wrote up in late 2013 at a 600 million market cap on seeking alpha and they were bought out in 2017 for 2.5 Billion by Allergan.

After completing a 3 week rounding POST IPO base this breakout should continue as investors catch on and quiet period is ending.

Catalysts near term for further upside:

Given the valuation accorded to ZELTIQ when bought out by Allergan in 2017 and the dual nature of both  Tattoo Removal and possibly Cellulite reduction with this device by Soliton, and the likely Joint Venture underway with Allergan now, we think the shares can appreciate materially from here for as much as a triple in 12 months. 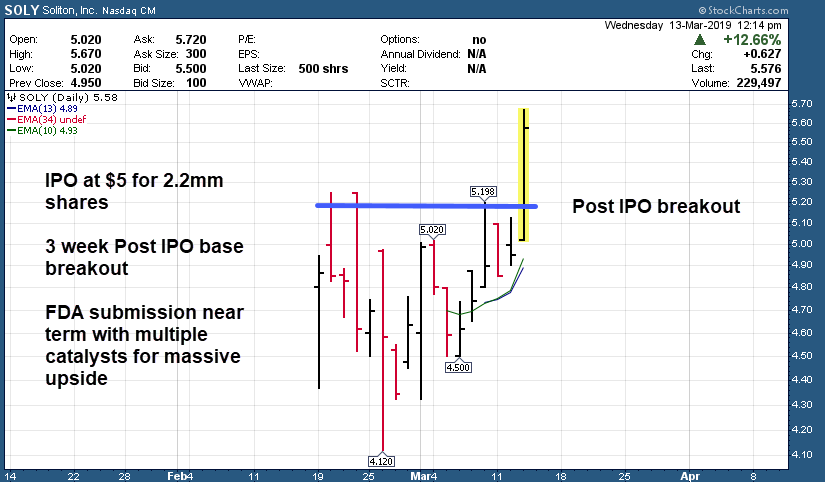